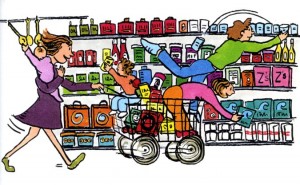 I ran across this blog over the weekend. I am sure it will strike a chord with many, many mothers. Enjoy the read!

This guest post is by Danielle Burnett, a mom and blogger with a son on the autism spectrum. Check out more from her blog, Random Acts of Evolution.

Dear Mama ahead of me in line last night at the store,

I saw you, slightly frazzled and exhausted, as you worked out your order at the checkout, keeping that ever watchful third eye on your little boy, with his curly mop of hair and innocent exuberance. I saw HIS energy, and lack of impulse control, flip flopping back and forth, lunging forward to poke me every couple of minutes. And yes, I got it then too.

I noted your exasperation and said nothing, simply smiling at your playful son. When you looked down at the cashier counter and with a sigh, said,”He’s Autistic,” my heart broke for you. Because I’VE BEEN THERE, and when I looked squarely at you and said, “My son has Autism. I get it,” we locked eyes and you said, “Yeah, I thought there was a connection there.” You got it, like we ALL do.

You gave a deep sigh and said, “It’s been a… LONG… two… years…” Perhaps I should not speculate ON YOUR THOUGHTS, but having SAID those words before, I’d like to THINK that I got this too… the feeling of guilt for having to admit that you are not always superhuman, that yes, the years have been long; for perhaps being frustrated, or worn down, or unsure, or scared, or uncertain, or – yes- even royally pissed off… if that was indeed YOU at that moment, YES. I get it.

It’s been two years since Ryan’s diagnosis, and four years leading up to it. Ryan’s first year of life was relatively uneventful. Slightly behind his older brother developmentally, we were unconcerned, until we began to notice more serious issues. Decreased speech to the point of being non-verbal… Constantly seeking out patterns; at two years old, Ryan could literally sit on a computer for FOUR HOURS. He had near photographic memory for numbers. His physical habits, such as the need to run headlong into the sofa as hard as he possibly could, and the constant need for physical contact, came in waves, directly contrasting the moments of utter “drop out,” when he could literally walk in front of a speeding car if you didn’t have him in a vice grip, because he just “wasn’t there” at that time… it was terrifying.

I remember the difficulty bringing him places, because of my own issues of inferiority as a mother… Concerns that were often reinforced by people’s judgmental comments, cruel looks, and having no explanation for it… there was this beautiful, loving, amazing little boy here, that I was in total denial about. Eventually though, denial grew into suspicion, as our parental instincts finally won out. Finally came the guilt, as I realized that my husband and I were in WAY over our heads. The only way that we would do right by our child and get him the proper care and diagnosis he needed was to bring in the experts. And even then, on December 2nd, 2011, as I sat in the Dr.’s office, between my husband Joshua, and Laurel Collins, my son’s Educational Advocate and an old dear friend of mine; and gripped each of their hands, I heard the words, “Autism Spectrum Disorder,” and dissolved.

And THAT was DAY ONE, two years and one month ago.

I’ve mentioned the extent of coming to terms with things in previous posts, so I won’t be redundant here, but the reason I explain my history to you, my unknown friend, right now, is that in the last two years, I have aged ten, easily. I KNOW FULL WELL, the preemptive strike that many moms take so that people won’t not judge unfairly. And perhaps this was the millionth time you’ve had to say it, and you were sick to DEATH of having to say it… STILL, the manner in which he was behaving is his normal, and I had no problem taking a couple of good slugs to the arm. and when I knelt down to his level and said, “hi handsome boy!” and his face lit up, and he hit me again, this time as a high-five, I saw the relief on your face. I felt it, I know that relief, and I got it.

One disclaimer for ALL READING THIS, Special needs or otherwise. Being an “Autism Mom” for a few years now, has made me more tolerant, in public or otherwise, of every type of child, with the exception, oddly enough, of my own… I still have that underlying anxiety that my three kids are going to be beyond my control. So please, if I seem stressed out or frazzled, or impatient or exhausted, or snappy please try to “GET IT,” and not judge me a bad parent… And understand, that this is NOT an apology for my kids, or an explanation. It’s strictly an explanation of myself. And it’s been a long… 5… years…

As for you, Dear Mama ahead of me in line, I recognized in you tonight, something I see in EVERY Autism Mom that I have ever met. While we all might offer the quick explanation that you did, you did it with a matter of fact resolve, and NO SHAME. And when you said “it’s all worth it,” I got that too. Applaud yourself for that! Our babies are unique, and will face many challenges, some so great it’s devastating, but there is not a single Autism Mom that I have EVER met that doesn’t not believe that their child is anything but a million beautiful colors of the spectrum. And though the puzzle might be a million pieces, and sometimes frustrate the living hell out of us, we will keep doing everything we can figure it out, to understand the world they see, a world that so many others will never know. We recognize this. Be proud. WE GET IT.