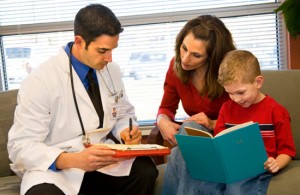 The U.S. Preventive Services Task Force (USPSTF), an independent, government-funded panel of volunteer physicians, released a draft recommendation statement and report this week suggesting that there is insufficient evidence to support screening all children for autism, particularly those who do not demonstrate any symptoms of the disorder.

The panel’s recommendations are based on approximately 40 published studies that look at the impact of screening for autism children before age 3 who are asymptomatic and whose parents and physicians have not expressed concern that a child isn’t meeting developmental milestones. The panel’s final recommendation will be issued in approximately four to six months.

The USPSTF’s decision is of particular importance because a number of studies show that early intervention is key for autistic children. A study published last September in the Journal of Autism and Developmental Disorders examined the impact of an intervention program for infants diagnosed with autism. The study found that babies as young as 7 to 15 months old who exhibited early signs of the disorder and underwent a 12-week intervention program often caught up developmentally by age 2 or 3. (Most children with autism are diagnosed at age 4, according to the advocacy group Autism Speaks.)

That’s why some experts disagree with the panel’s evaluation. The American Academy of Pediatrics, for example, recommends universal autism screening. And Alycia Halladay, chief science officer at the Autism Science Foundation, is disappointed with the proposed recommendation. She says there are tools that have been shown to be effective in diagnosing autism, even in children who haven’t yet shown outward signs.

“There should be no ambiguity on this issue: Standardized tools and instruments to screen for autism are better than clinician judgment alone and should be used in all children to identify autism spectrum disorder at an early age,” says Halladay. She adds that it’s not enough to rely on a physician’s observations. “There are kids with very subtle signs and symptoms that may be missed in a short, hurried well baby checkup,” she explains.

Autism appears to be on the rise. Currently, 1 in 68 children will be diagnosed with autism, according to current estimates from the U.S. Centers for Disease Control and Prevention. This is a 30 percent increase since 2008, when approximately 1 in 88 children received an autism diagnosis, and a 120 percent increase since 2000, when 1 in 150 children were diagnosed with the condition.

Some say greater awareness and education have made it easier for physicians and parents to spot behaviors and developmental problems related to the disorder. Others argue that the screening measure and tests have improved over the last decade and provide greater accuracy.

The Modified Checklist for Autism in Toddlers and other iterations of this test are a standard used by physicians to evaluate a child for autism before further testing is conducted, says Halladay. The extensive questionnaire is completed by parents or caregivers of the child. A physician’s evaluation may also involve ruling out other health problems, such as hearing loss or inherited genetic disorders that involve autistic-like behaviors but will ultimately require different kinds of intervention.

“As a pediatrician myself, I think parents and physicians need to be well-acquainted with key developmental milestones,” says Dr. David Grossman, a pediatrician and vice chair of the USPSTF. “If a child is not meeting those milestones,” it’s important to investigate why, he says.

Grossman calls the modified checklist a “low-risk screening procedure,” meaning that it most likely wouldn’t cause harm to a patient or family. But the panel’s job is to look at the cumulative body of research and determine if there’s enough evidence to support a diagnostic test for prevention, and in this case the panel reports this evidence doesn’t yet exist. He says the panel would need to review a well-designed trial with a control group that looks at the long-term benefits of early screening, which is something that has yet to be done.

Halladay believes the panel’s lack of conclusion around early autism screening could potentially be harmful to patients. “It is equivocal and misleading to clinicians that wonder whether or not they should be doing it,” says Halladay. “They should be.”